Tuesday after school I was talking with a colleague, we were discussing what we were doing in our classes. He teaches music and is our band leader. I mentioned that I loved seeing his “I am marching for…” photos and explanations on the walls of my school before AND after Memorial Day in a blog post in 2014 and I asked if he planned to assign the project again this year. He replied,

I mentioned to him that I was the person who did the “Today in History” slides for our school’s morning announcements. He told me he enjoyed them and always shared them with his first period class, but noted that the “Today in History” slide for the day, Tuesday April 4 was rather somber. I agreed – Dr. King is assassinated. I mentioned that Tuesday was the 49th anniversary of the shooting and that I had planned out several memorable ‘Today in History’ slides, for the remainder of the school year – namely today’s slide – U.S. Enters World War 1. 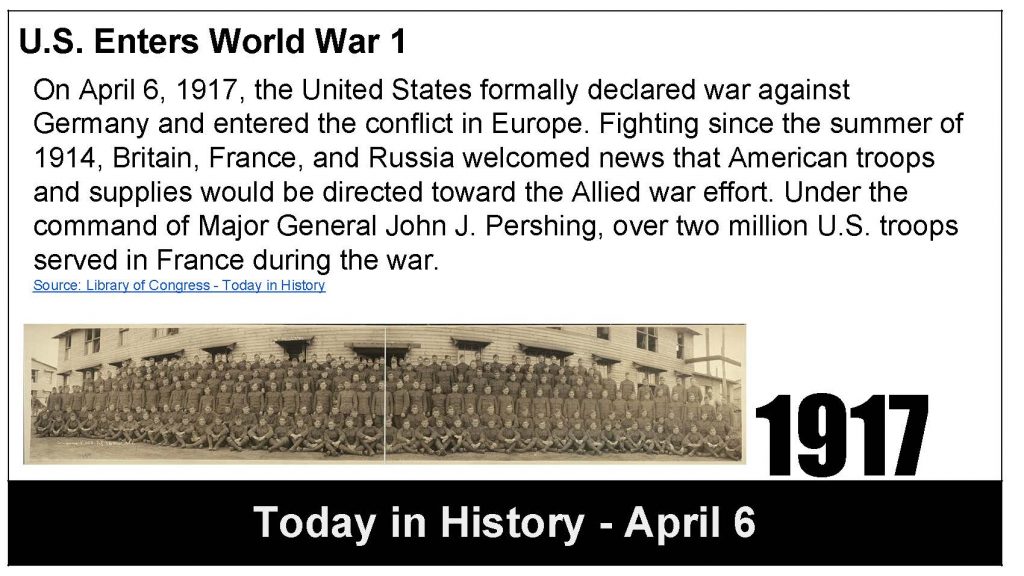 “What a dumb war,” he said immediately.

Yes, what a dumb war, indeed. I agreed. I couldn’t agree with him more. It was a dumb war, most wars are.

My history classes and I have been studying the years leading up to World War I and we are finishing reading President Wilson’s War Message speech. It’s over 3500 words long and I have divided it into small manageable parts for my 8th graders. But it is not an easy read.

But, the United States was late in coming to the war. The war had begun in July 1914 after a combination of militarism, a system of alliances, imperialism, and a budding nationalism was set afire by a spark – the assassination of Arch Franz Ferdinand of Austria-Hungary.

In May 1915, a German U-boat sank the passenger liner RMS Lusitania and killed 1198 passengers and President Wilson protested. The Lusitania sinking turned world opinion against Germany, but the United States did not enter the war. Meanwhile, the United States remained neutral, and continued trading with the Allies – war material and food. 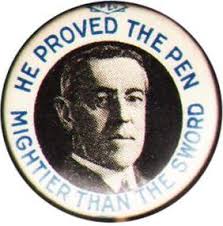 In 1916, President Wilson campaigned for president with the slogan, “He Kept us out of the War.” However, by the time 1917 arrived, the United States could no longer stand aside and remain neutral. Germany was desperate and had resumed unrestricted submarine warfare but the final straw was the interception of the Zimmerman Telegram in which Germany proposed an alliance with Mexico promising the return of territory taken from Mexico in the mid-nineteenth century. Public sentiment was for war and on April 2, Wilson addressed Congress and asked for a formal declaration of war against Germany.

It was a dumb war.

I suppose all wars are dumb, but this war created more problems than it solved. Historians estimate that somewhere between 17 million and 20 million people died during the war. The United States would lose 117,000 men and women in the war, the United Kingdom almost a million, and France a bit more than a million. But most importantly Europe would lose a generation of young men and stumble into another war in another two decades.

It was a dumb war, most wars are.

Today is going to be a great day. It’s Thursday and 100 years later, but seemingly there is more of the same in the world today. We all want to be free, we all want self-determination, but perhaps reason might prevail. Making the Days Count, one day at a time, one lesson for my 8th graders, and one history lesson for me.

May the leaders of the world open their ears to listen. Peace.

This site uses Akismet to reduce spam. Learn how your comment data is processed.